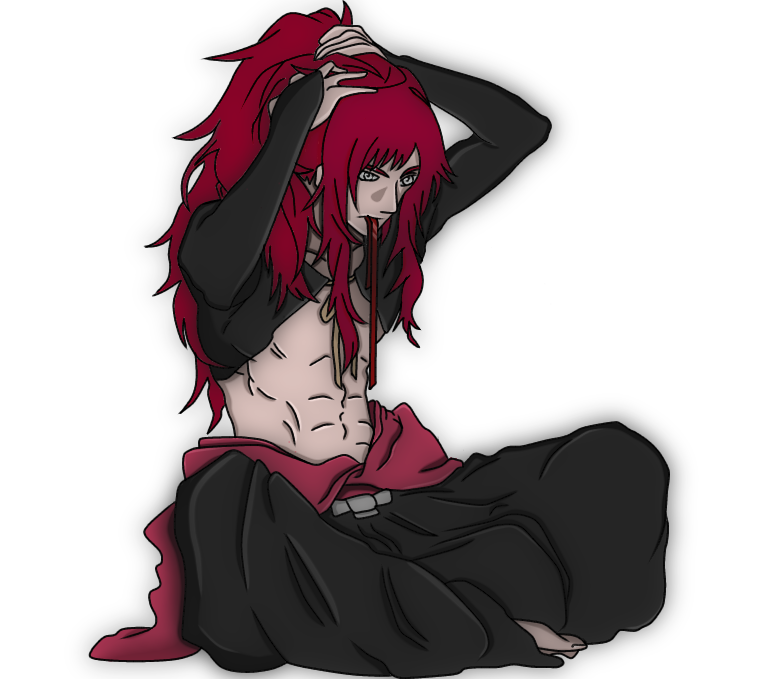 Being alerted by the sound of the footsteps approaching he could tell the Kyori was already present, it troubled him that she was asked to share this burden with him. As he became her sensei with such a short age gap the two often acted more like siblings rather than master and student. Closing his eyes for a moment to embrace the moment meanwhile his thoughts would travel elsewhere finding a way to discard his emotions briefly, he never thought the day would come when Kyori and himself would be burdened with such a great responsibility. With so much power being entrusted to them Mako was certain this was a sign of an ill omen and not him being paranoid, without a doubt he knew their come a battle where both him and his sworn sibling and student would have to use the power stored within them as a weapon for what the cause was he could only hope it was just. For now he would play it cool and refrain from showing too much concern.

"Hmph, are you kidding me, didn't you hear while you were skulking around in the shadows? I was born ready, becoming Shukaku's jinchuriki is practically in my blood might as well even say that i'm practically a tailed beast myself ya know."

Crossing his arms with a comical smirk on his face his display of confidence definitely was a sham to cover up any signs of weakness, however not of all that was true when it came to keeping Kyori and the village safe he was willing to do whatever it takes. If turning his body into Suna's greatest weapon was the only way to make sure the village had a fighting chance he was willing to risk his own life. Alone Makoto was like a one man army but with Kyori's wits the duo seemed nearly unstoppable as if they could take down an entire fortress in a single night. Despite his grattidue not being expressed Mako, was very much obliged. He felt there was no one else he would have had at his side Kyori was someone who was trust worthy despite being an outsider of the village she has proven time and time and again that it is her duty to protect all that belongs to Sunagakure. Now it was time for both to receive a gift that most see as a curse and share one half of the biju known as Shukaku.

Like his great grandfather Makoto was destined to become a jinchuriki to protect the hidden sand and become one of the land's most valuable assets, he only hope he could live up to expectations when the time came. Mako was chosen due to his unwavering loyalty and selfless acts around the village, despite being a loud mouth and a trouble maker he was always one to protect the innocent. It had been eight long years since he rescued Kyori from slavers and now she was standing beside him as his equal; no longer a damsel in distress Makoto was proud of what she became. Not letting her past define who she is he couldn't help but do the same and keep pushing forward. Looking around the room there was tons of space to train without worrying causing too much devastation to the Earth's surface. Knowing Makoto and Kyori the two would push each beyond their logical limits as if they were in a real battle, so it wasn't a surprise when Yuichiro had a place for them both to train without the need to hold back. The two often would have to find an open space to train how relentless their training session can be.

Once the doors opened and she saw Kyori standing there waiting for Makoto and herself has brought back some memories of the kunoichi, an old memory tucked away deep in her mind. Still, it kept open for her to reminisce those days before she became who she is, like the time she spent most of her office hours disciplining Kyori about the harsh reality of becoming a ninja, such disciplines were taught very early before kids are sent to the academy "Being a shinobi is not all fun or games, nor is it a field trip! It is about serving your village, your very nation as a warrior, as an assassin, or as a ninja, as the very sword of your Kazekage!" she says throwing a spin and kick at a small kyori lunging angrily at Yūichirō, having watched her struggle at landing a single hit is now getting knock back down to the ground with a nasty smack to the little girl's face "You mustn't let your emotions cloud your judgment when in the heat of battle, you must never get attached when doing your duties as a kunoichi............but your not a kunoichi yet" she says staring at the girl who growls in rage but didn't charge, clearly she's now seeing the picture "Easy for you to say, I'm just a kid! I'm not strong enough to land a hit!" Kyori spoke with clear irritation on her face as well as a visible vein on the forehead while Yūichirō simply took it as amusement but didn't show it "It doesn't just require strength, it requires much more than that" kneels down to Kyori's level and taps her head "it requires your head and heart, remember that when your in the academy" stands back and gestures the girl to follow before the flashback ended.

Yūichirō returned to the present with both Kyori and Makoto to each other like they've known each other for a long time, this is progress Yūichirō did not expect nor did she count on Kyori developing an attachment to Makoto so far into her career as a kunoichi that she can't help but chuckle this odd similarly to her own parents' predicament at that age and often brings it up, cover her mouth with a hand and clears her throat "It is nice seeing you both get along so well" walks right past them but gives them both approving nods before walking into the center of the room, the massive doors slam shut by themselves and Yūichirō looks around the chamber "Remember when I first brought you two together, announcing you as Kyori's sensei?" she asks them while causing the sphere to levitate in her hand and spin so she looks at all the carved sealing glyphs on it.